In Memory of my Mom

It's been awhile since I updated my blog. On January 19th, at 8:15 in the evening, we received one of those dreaded calls....my Mom was being transported to the hospital as she wasn't feeling well at a meeting she was attending at her Church. She suffered a stroke and bleeding and passed away at 6:00 a.m. on January 20th. It was a great shock to lose my Mom so suddenly as my Dad passed away just this past September. Mom was doing very well and in excellent health. We got to the hospital right behind the ambulance and she was already non responsive. It was very difficult not being able to communicate with her at all anymore. 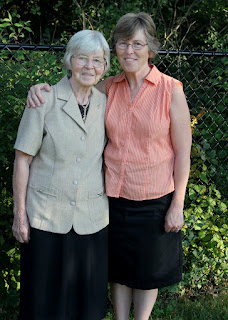 We miss her very much! It still doesn't seem real that she is gone. She was a blessing to many people..her specialty was writing cards of encouragement to everyone who came across her path. She had a deep faith in God and shared freely her stories of God's guidance throughout her life through the difficult days of World War 2 in her native Holland, her immigration to Canada in the 1950's, the financial hardships she faced and the joys of her family of five children and her extended family. We are thankful that she didn't suffer. She was a simple woman, but her life touched many, many people. The pastor called her an extraordinary, ordinary woman.

I've been slowly trying to get back into 'normal' (whatever that is :-). I got back into some sewing this week. A fellow quilt guild member received over 100 of these small braids, sewn with 1" strips (1/2" finished!). I got to take them home to see what we could do with them to make a quilt for the chemo unit of our local hospital. This layout had possibilities: 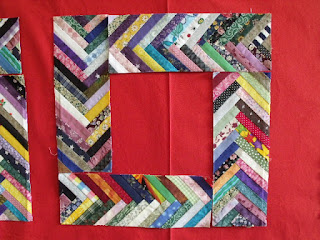 I tried a block with a 6" center square...it would be cool to quilt daisies into the square possibly: 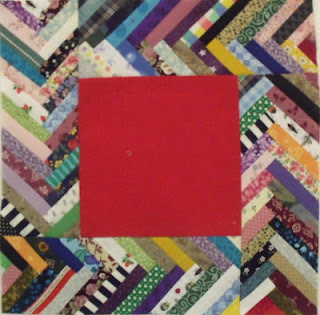 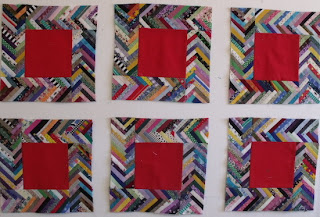 I think I'll put 2" red sashings in between the blocks so the braids appear to float. We should be able to make 25 squares which should work out to a nice sized lap quilt. I'll post another picture when I get more blocks finished. 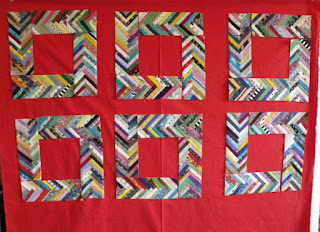