Just finished a long overdue UFO this evening!  In 2007, I hosted a Canadian block exchange on the Treadleon list (a group dedicated to using people powered sewing machines).  The exchange was open only to Canadians.  We had 16 participants and exchanged 6" finished blocks.  The blocks were signed with our names and the machine we used to sew the blocks.  We were encouraged to use a Canadian made machine or one with a Canadian connection if possible.

The exchanged blocks were put in a drawer and awaited inspiration.  They went through a move to a new house and were finally hauled out of the envelope about 4 years ago and put into a top.  The aim was to get the top done before Canada Day.  The pinned top was buried in a basket of UFO's and I would come across it at various times during the year with no incentive to work on it at the 'wrong' time of the year LOL.  I came across the pinned top again in May and hung it over the back of my sewing chair so it would not go "out of sight, out of mind".  Last week, I sat down and quilted it over a couple of evenings, using if for practising free motion 'stitch in the ditch' quilting.  The binding was just finished tonight!  I hope to use it as a table topper for a July 1 celebration of thankfulness for being a Canadian!  My block is the sailboat in the top row.

Closeup photos of the blocks in the quilt: 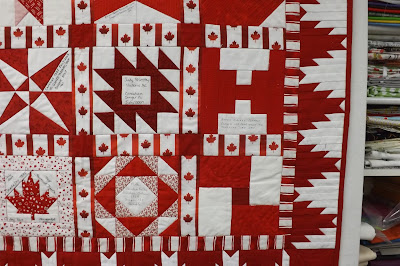 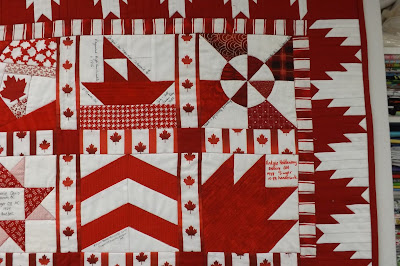 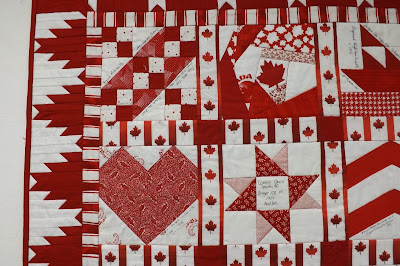